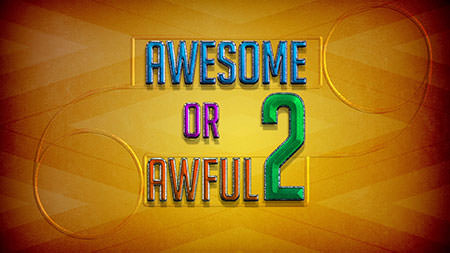 Awesome or Awful 2 is the in demand sequel to the popular original runaway hit from 2013. Contestants are given two choices: one awesome...and one awful. As the game progresses, the awesomes get more awesome, and the awfuls get, well, check your local and state laws before purchasing.

They said it couldn't happen.

They said it was impossible.

They, like the Israelite spies in Numbers 14, said "The Sons of Anak are there. Let's go back to Egypt."

The best game that has ever and will ever (hopefully not true) grace the interwebs of Download Youth Ministry now has a sequel for the ages: AWESOME OR AWFUL 2.

Critics are hailing it as:


"The sequel to the best game ever." - Travis Prouty, creator of the game

"I'm going to use this in my youth group!" - Josh Griffin, boss of aforementioned critics

"What do you mean 'sort of co-creator'!?" - Also Colton Harker

Get ready for great youth group fun with this one!

Llama-tested, youth ministry approved! Resources by the DYM Team are trench-tested, high-quality, and stand up to the DYM L.L.A.M.A. standards: Looks great, Laughs guaranteed, Actually used in real youth groups, Made with love, And...we ran out of things for the acronym but you get the point.